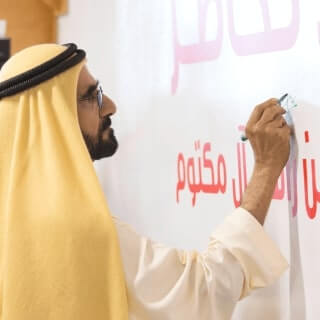 The Government Accelerators is a UAE Government initiative launched by His Highness Sheikh Mohammed bin Rashid Al Maktoum, Vice President and Prime Minister of the UAE and Ruler of Dubai, in October 2016. It serves as a platform for federal and local government entities to address challenges and achieve ambitious goals in short periods. It focuses on accelerating the delivery of strategic programs, the development of policies and regulations, and enhancing government services.

The Government Accelerators aims to rethink how government works by introducing a unique model built on accelerated results, increased collaboration and innovation.

The Government Accelerators emphasizes integration between federal and local government entities, the private sector, academic institutions, and NGOs with the aim of driving innovation and ultimately achieving the UAE’s government ambitious plans.

As His Highness Sheikh Mohammed bin Rashid Al Maktoum said: “Successful nations are not gauged by their size, but in the speed by which they accomplish achievements and bring forward innovative solutions to challenges in transitioning to the future, as well as active participation in making a difference in the lives of people.”

The Government Accelerators introduces a framework that not only allows for better integration between federal and local government entities, but also enables experimentation and innovation. By empowering front line employees and giving them the reins, the initiative has bypassed bureaucracy, fostered agility, and allowed to hone government human resources leadership capabilities.